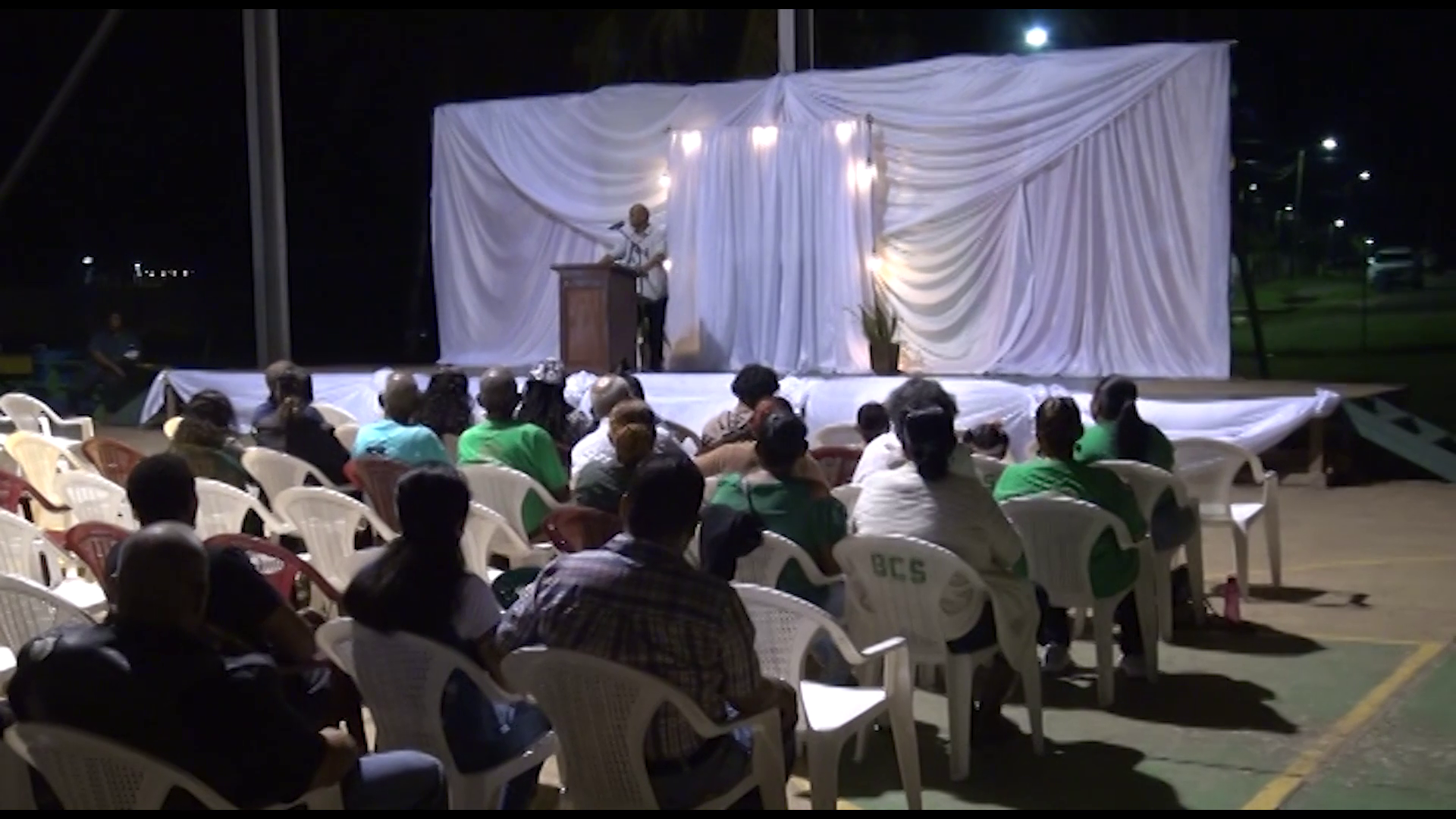 BCS Come Together to Mourn the Ramnarace Brothers and Vivian Belisle

The UNESCO World Heritage Centre publicly paid respect to Vivian Belisle-Ramnarace, who passed away over the weekend. She is the third victim of the New Year’s Eve shooting in the Maya Mopan Area, Belmopan. UNESCO cites Vivian as the National Focal Point for the Belize Barrier Reef Reserve System World Heritage site (Belize).  The 2001 graduating class of Belmopan Comprehensive School held a candlelight vigil last night, in memory of Vivian and her husband Jon and brother-in-law, David. Reporter, Giovanna Moguel, has that story.

Roughly 200 people converged on the Belmopan Comprehensive School (BCS) compound to show their support to the families of the slain Jon Ramnarace, his wife Vivian and his brother, David, affectionately known as “Mikey. The graduating class of 2001 held a candlelight vigil to denounce the violence and to call for change.  The evening began with a prayer led by Pastor Deon Pascascio, who is also Vivian’s cousin. Pastor Pascascio recounted fond memories he and the family created with Vivian before her tragic passing. Pastor Deon Pascascio, Vivian Ramnarace’s Cousin: “She knew what she wanted from a very young age. Her mom recalls her coming home after a career day in second form saying “I want to be a marine biologist.” and of course we laughed at her because she did not know how to swim or to dive. But she was committed and every weekend, every opportunity she got after that she would go to the nearby rivers and creeks and practice to swim and when she got even older she would go to the cayes with a family friend of ours to learn to dive and all that. She was determined that that was what she wanted. At age 18 she went off to the University of Hawaii to begin to do her Bachelors and study for what she had a passion for.”

The residents call for peace after gun violence claimed the lives of the two men on New Year’s Eve and left Vivian hospitalized. The tragic incident left the city mourning, but they had a glimmer of hope as Vivian was on the road to recovery. However, this hope was short-lived as Vivian took her last breath on Sunday, January 15. Ramnarace family friend, long-time educator and former Deputy Mayor Jacklyn Burns, delivered a speech, in which she demands that no stone is left unturned in the search for justice to be served. Jacklyn Burns, Deputy Mayor, Belmopan City Council: “I know that we are all hurting for our losses. When I reflect on Vivian I never knew Vivian personally but I knew Vivian from all of John’s stories. She was the character that I never got to hang out with but I knew all her stories and they were all beautiful. And he would say “Jacks me and Viv and Catie-” I remember when he built the deck, I remember when he installed the camera, I remember when he started up his garden and she shared those stories just in casual conversation. I never knew that they would become such treasured memories but they are. I treasure again us in Belmopan the way we feel for each other, the way we support each other and the way we carry ourselves outside of this city and Belmopan will take the very core of our voices for the entire country to know that you know what if everybody grows tolerant of these murderers in the country we certainly aren’t. One of the things that I have spoken to individuals that I’ve talked to about the situation is lets go keep the pressure on them. Make them understand that they took one of our Belmopan family and we’re not going to tolerate that. We want justice. We are angry and Pastor I understand that we need to bring this to God and we need to ask him to carry us through our anger but we had such a great loss and the only way I think that we’ll be able to heal over this hurt is when we know that the people who took our loved ones, the loved ones that we sacrificed so that we would be able to earn better justice in this country that their killings were brought to justice.”

The night was somber; however, that did not stop the persons from all walks of life, who had crossed paths with Vivian, Jon, or Mikey, to come out in full force to express their grief the violence has had on them. Pascascio’s family friend, Board Member of the Belize Red Cross, Glenys Hernandez Johnson, paid special tribute to the three.

Glenys Hernandez Johnson, Board Member, Belize Red Cross: “The Belize Red Cross family is extremely saddened for the loss of two of the siblings John Ramnarace, Vivian Belisle Ramnarace but also to David Mikey who was also a part of us.”

The 2001 BCS class is also accepting pledges to start an education fund for Jon and Vivian’s only child, their five-year-old daughter, Kait-Lynn. Giovanna Moguel for Love News.

Two Men Charged for the murder of San…