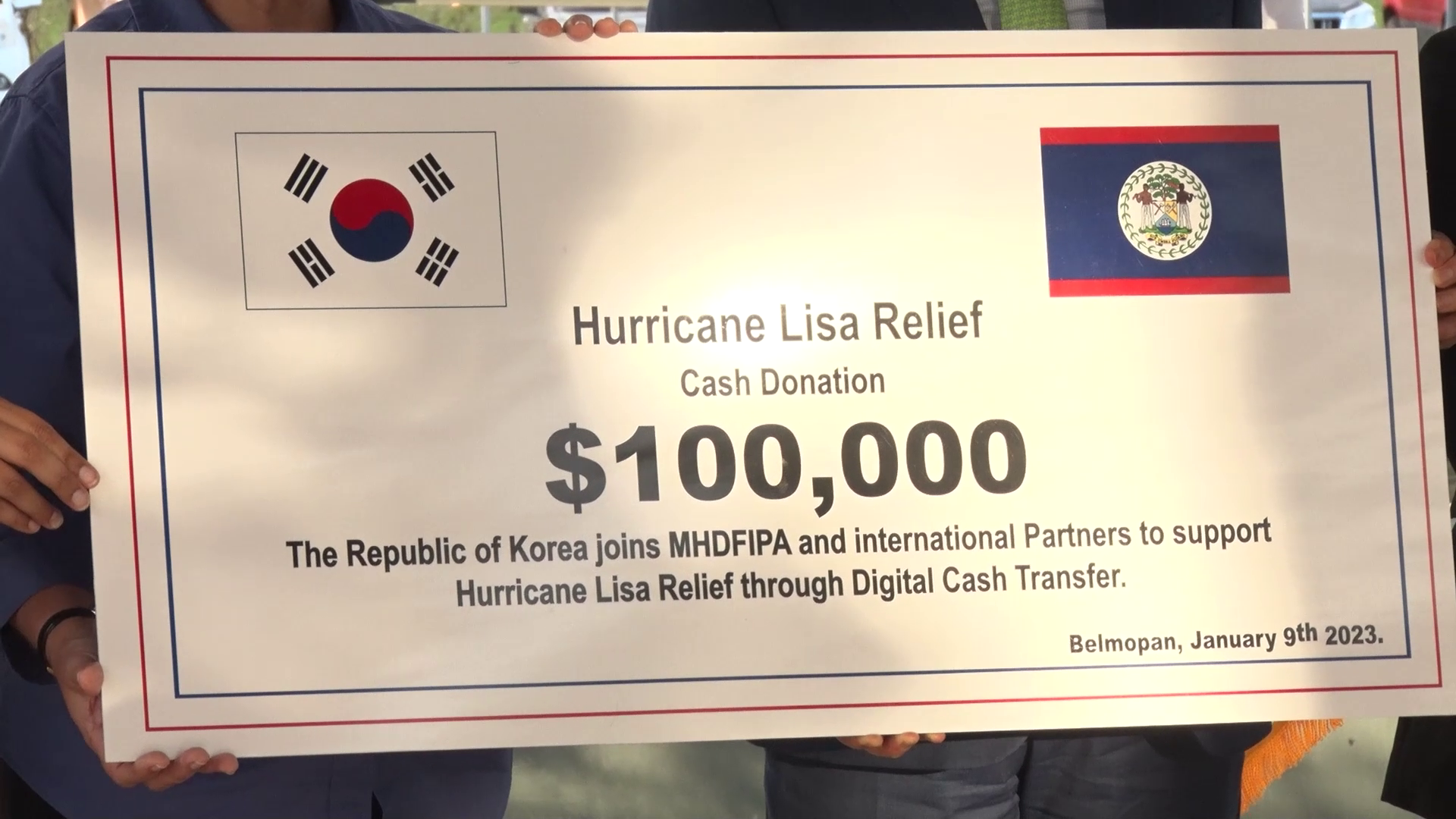 Belize receives assistance from the Republic of Korea

Belize has received humanitarian assistance from the people and the Government of the Republic of Korea to assist in the recovery from Hurricane Lisa. The donation of two hundred thousand Belize dollars was handed over yesterday to the Ministry of Foreign Affairs through the World Food Programme (WFP). The monies will be distributed among families that were affected by the hurricane through the Ministry of Human Development, Families, and Indigenous Peoples’ Affairs. In addition to the monetary donation, the ministry also received four new vehicles to aid in its everyday operations. Yesterday during the handing-over ceremony, CEO, Amalia Mai, spoke about the significance of the donations and expressed gratitude on behalf of the Belizean people. Amalia Mai, CEO, Ministry of Foreign Affairs: “This contribution will complement ongoing humanitarian assistance to families for direct cash transfer in the wake of Hurricane Lisa. These transfers coordinated through the Ministry of Human Development Families and Indigenous Affairs respond directly to the continued and immediate needs of the families most affected by the hurricane and most of them of course are in Belize City and I’m sure that Minister Dolores will do her own part in recognizing our gratitude for this. The second support that we’re celebrating today is of an operational nature to the Ministry of Foreign Affairs and Foreign Trade and it really is the donation of four spanking new vehicles with the blue bows to support the work of our ministry. And it is already being put in use as I had indicated earlier we have the chairmanship of SICA for the next six months, we have the first delegation arriving this weekend so the vehicles will be put to very good use in transporting our visitors. And beyond the six months we have a very active foreign ministry and so this will assist us and go a very long way in treating more visitors the way we should. So thanks again for that donation. You can rest assured that we will take very good care of it.”

Minister of Human Development, Families, and Indigenous Peoples’ Affairs, Dolores Balderamos Garcia, says that the donation will greatly aid in providing affected persons with the necessities needed to recover from the devastating effects of the storm. Dolores Balderamos Garica, Minister of Human Development,: “Just about a week ago we were in Hattieville which is a part of my constituency and we met a young lady who had just given birth one week before and because of very kind donations from partners we were able to give her a large box of newborn pampers and she was ever so grateful because she had the need. I want to share with you our Korean friends in particular that I represent a very large rural constituency in the Belize district so even though Belize City was probably the most affected it wasn’t the only affected. There are two Belize district constituencies that are large, Belize Rural Central the one that I represent and Belize Rural North so since the hurricane passed through Central Belize Belize City was very hard hit but also Belize Rural Central and Belize Rural North. So I want to tell you that this is very very close to our heart that we have such wonderful partnerships. Not so much we look at the quantum of the donation but what truly comes from your heart we are extremely grateful for and every little bit will be put to good use.”

Hurricane Lisa battered the Belize district last year November and caused damage to thousands of properties across the country.