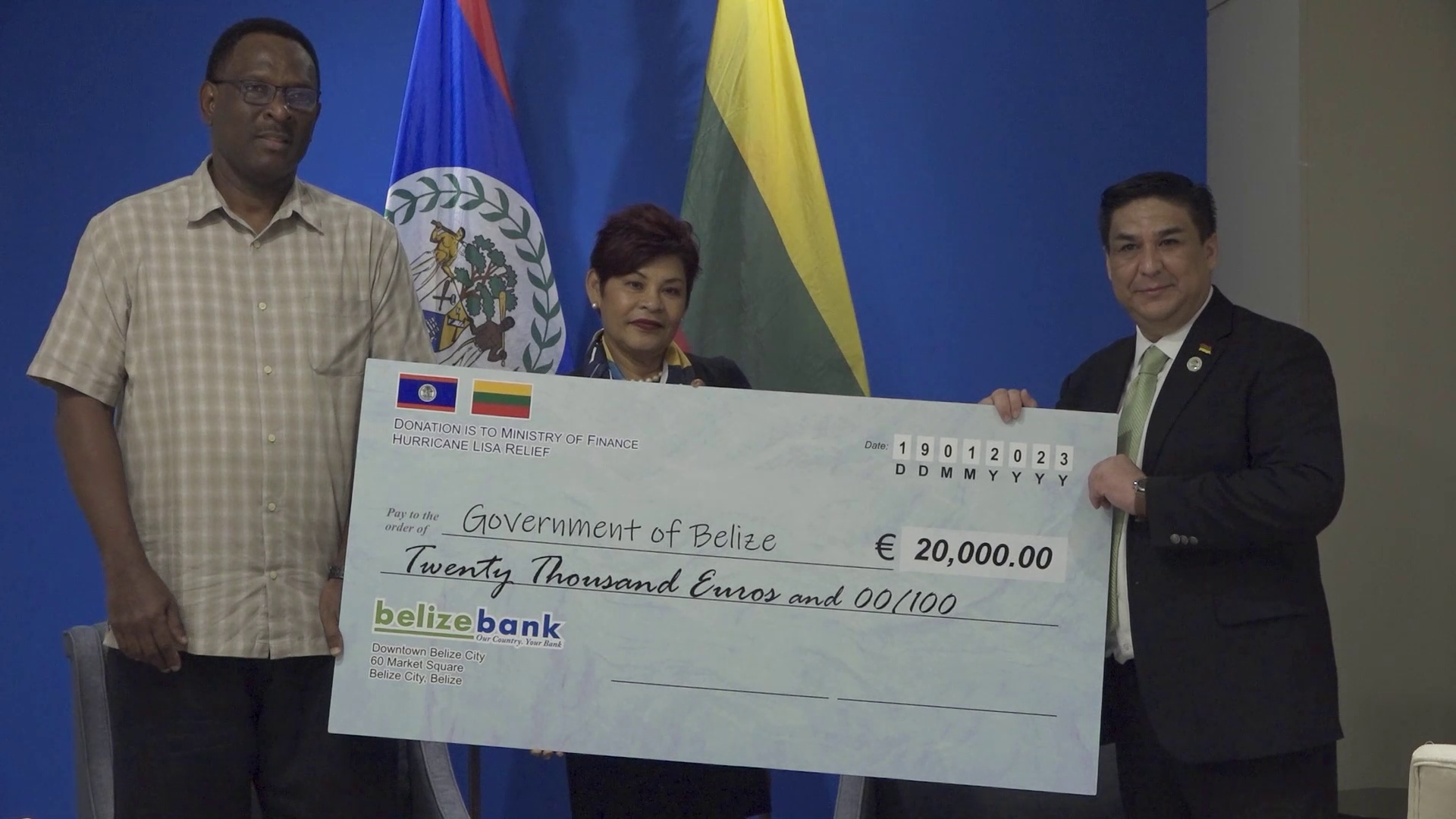 The Ministry of Foreign Affairs, Foreign Trade and Immigration continues to engage with its bilateral and multilateral partners in securing Hurricane Lisa relief. Yesterday, Belize received a cheque for 20,000 Euros from the people and Government of Lithuania. The cheque was officially handed over to Ambassador Amalia Mai, CEO of the Ministry of Foreign Affairs and Foreign Trade, by Carlos Perrera, the Republic of Lithuania’s Honorary Consul to Belize. Ambassador Mai said the assistance will go a long way. Amalia Mai, Chief Executive Officer, Ministry of Foreign Affairs, Trade and Immigration: “Let me thank Lithuania, the government you represent, for their generosity. You know that one of the things that we are totally satisfied with that there was no loss of life in the passage of Hurricane Lisa. But certainly more than 5,000 families were affected, lost their homes, their homes were damaged and so the relief that Lithuania -the assistance that you’re giving to us right now is very very important to assist these families. A lot of them still need more assistance to get back on their feet an it’s critical for all our partners, for all our allies, for all our friends overseas to help us because pretty much we would feel like we would want to do the same as well. But Lithuania is a country that we also want to get closer with and I think Honorary Consul you will play a big part in that. I think we have, country to country, we both have needs. The generous gift from Lithuania will go a long way in assisting a number of families that had been affected. I know that the hurricane was in October but still many people are still living in conditions that we need to assist so this is very helpful. We’re gonna help them as much as possible. Col.Defour is here and I know that he will make sure that everybody is treated fairly and according to their needs. So thanks again I think it’s a good contribution and it shows that when you need assistance and your friends come helping we know who are friends are.”

Belize also received a donation of zinc from the Embassy of the Republic of Panama that will be used in the rebuilding efforts to assist persons impacted by Hurricane Lisa. Ambassador Amalia Mai, CEO of the Ministry of Foreign Affairs and Foreign Trade, officially received the donation from Martha Irene Boza, Panama’s ambassador to Belize. Colonel (Ret’d) Shelton De Four, National Emergency Coordinator for the National Emergency Management Organization, was also present for both handing-over ceremonies.