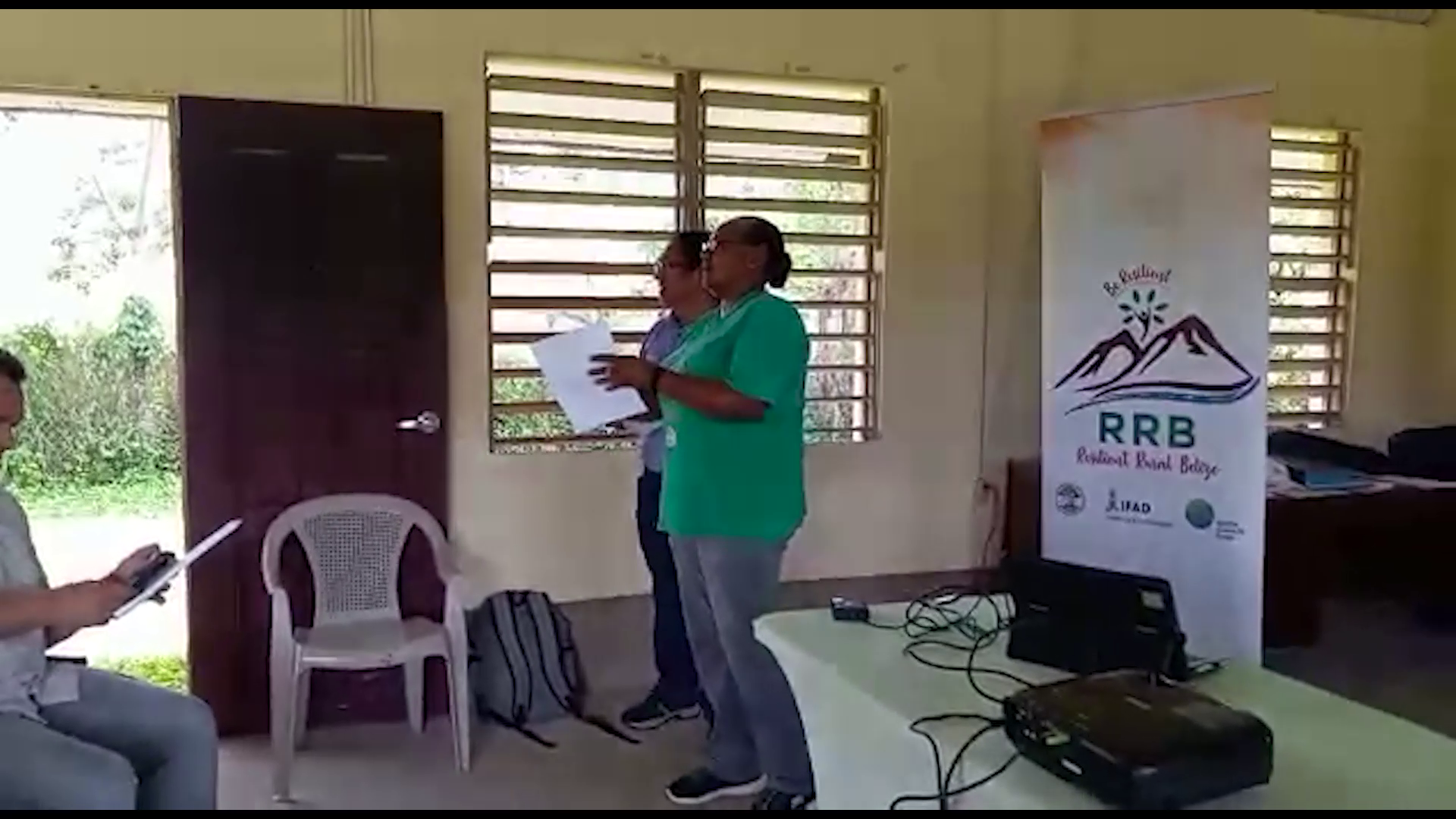 The community of Santa Rosa in Stann Creek District is going to be able to draw down on funding and resources from the Resilient Rural Belize Project. Over the weekend, eligible residents of the village gave their written “YES” to the Free, Prior and Informed Consent (FPIC) Agreement and the Indigenous Peoples Plan (IPP). The agreement indicates that Santa Rosa Village has given its consent for the Resilient Rural Belize (RRB) Programme to commence work in the community. The RRB is a six-year, 20-million U.S.-dollar programme aimed at minimizing the impacts of climatic and economic events on rural small farmers while supporting sustainable market access for their produce. Chief Executive Officer in the Ministry of Economic Development, Dr. Osmond Martinez explained why this is important. Dr.Osmond Martinez, CEO, Ministry of Economic Development: “We were trying to get the FPIC approval from the community which was approved. Everyone practically voted in favor. Three voters abstained from the community. Then we signed the agreement meaning that the community of Santa Rosa will now qualify to enter into the RRB program and enjoy the different benefits that they can get from the program.”

Reporter: Talk to us about this project. Describe it for us.

Dr.Osmond Martinez, CEO, Ministry of Economic Development: “Well the RRB project has several components. One is an irrigation system. Two is focused on vegetables. Three is looking at how climate change is impacting or has impact and will continue to impact the agro productive sector. And five there is the counterpart funding for infrastructure as well so the project was practically rescued because it was signed back in 2016 but nothing was done so when we went to COP26 in Glasgow we managed to rescue the project and this year we have been a little bit more active, still not where we want to be but it is going well so far.”

The RRB’s Program Manager, Dr. Geraldo Flowers explains that the project can greatly assist small farmers, who contribute a lot to the country’s economy. Dr.Geraldo Flowers, Programme Manager, RRB Project: “The Resilient Rural Belize Program is funded by the Government of Belize, the International Fund for Agricultural Development and is the first GCF (Green Climate Fund) funded project in Belize. It is designed specifically to help rural communities increase their efforts at poverty alleviation through the development of production methods and better implements for farming. So it targets small farmers particularly small farmers who are organized themselves through cooperatives and associations and it works all over the country of Belize in rural communities.”

Reporter: So in light of Santa Rosa describe what happened here today.

Dr.Geraldo Flowers, Programme Manager, RRB Project: “Santa Rosa is part of what the Government of Belize deems as an indigenous community and so before RRB, the Resilient Rural Belize program can go into a resilient community it must seek the community’s consent through a process called FPIC which is Free Prior and Informed Consent. So we have been working with this community for the last six months. We have been educating them about the benefits of the program and we have been seeking their consent and so this is what happened today. We did so in writing by signing “Yes” that they are willing for RRB to work in their communities so that is what happened today.”

Reporter: Specifically what kind of work will take place ?

Dr.Geraldo Flowers, Programme Manager, RRB Project: “There are three main areas. The first is capacity building. We will be working with them to increase their agricultural production using climate smart agriculture. We will also be providing them with implements such as seedlings, such as fertigation methods, such as greenhouses to enable them to produce particularly vegetables such as sweet pepper, cilantro, tomatoes more efficiently and more effectively and the training will be open to any farmer within the community who wishes to participate.”

Reporter: And is there as market for those vegetables ?

Dr.Geraldo Flowers, Programme Manager, RRB Project: “We are looking at markets particularly in Belize. We are looking at the tourism markets in particular in fact next week the Belize Marketing Development Corporation will be opening a vegetable market in San Pedro and we will be one of the programs that will have direct access via an mou with that particular organization such that cooperatives in areas such as Santa Rosa will have access to those tourism markets.”

For any activity to be implemented in areas where indigenous people are present, such as Santa Rosa Village, the RRB Programme has to implement the legally required process of the FPIC, which is a relatively new practice in Belize. The FPIC was developed using international instruments such as the International Fund for Agricultural Development and Green Climate Fund requirements, including the United Nations Declaration on the Rights of Indigenous Peoples, the Caribbean Court of Justice Ruling of 2015, and the Maya of Southern Belize FPI Consultation Protocol.

The Ministry of Blue Economy to Host Climate…

BELAIFA and the Kidney Association held their annual…