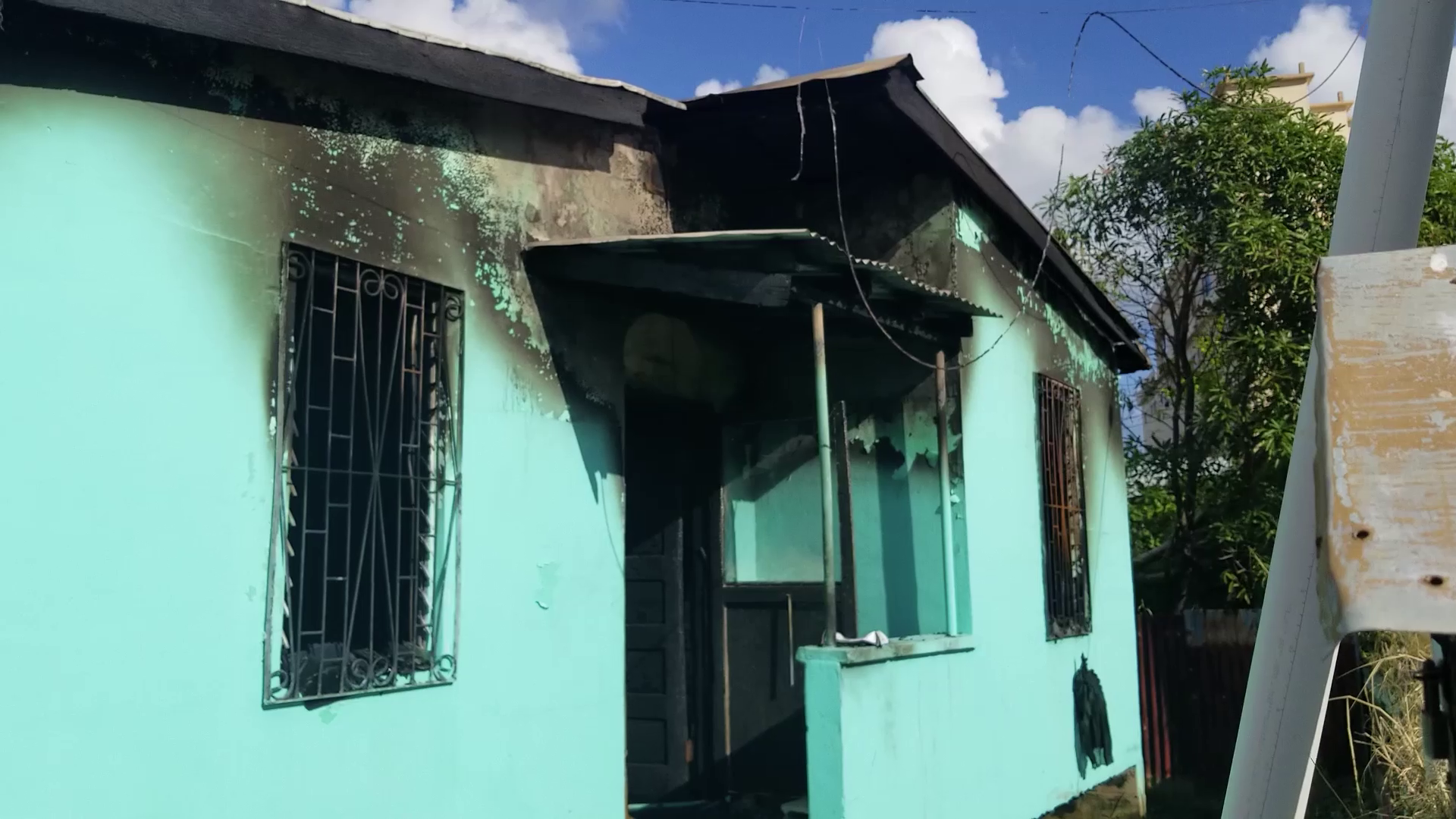 Tonight, a family is mourning the loss of its matriarch after she tragically passed away in a house fire. Eighty-three-year-old, Elita Coleman, perished inside her home on Rasta Street, Belize City a little after midnight on Sunday. Reporter, Giovanna Moguel, spoke with her son today to find out more about this tragic incident.

Giovanna Moguel, Love News: This is the scene where eighty-three-year-old, Elita Coleman, took her last breaths as flames engulfed her home in the wee hours of Sunday morning. A little after midnight, Raymond Pitterson received a call from the neighbors alerting him that his mother’s house was up in flames. Firefighters were called to the scene; however, they were unable to extinguish the fire. Pitterson recounted the sequence of that tragic incident. Raymond Pitterson, Son of Victim: “The fire started from in the kitchen and the young lady living at the house over there she was cleaning out and said three police came on a cycle and he was hollering go and help ! Go and help the young lady. See the young lady by the window bawling.” So they stood up and said that is not their job that is what I heard, that it ‘s the fire man’s job. So still yet it looked like they made up their mind and they went and kicked in the door but so said as they kicked in the door they saw the smoke way to the back in the kitchen so what they did they said that is not their job they told my mom ma’am that is nor our job we have to wait until the fire truck comes. So now they stood up right by the veranda and they stayed right there until the fire truck came. But when the two fire trucks came they came without water so the two fire trucks came empty. How will you come to out a fire without any water that is what I want to know so when this young lady gave me a call and I came I said what the hell is happening here ? The house had already burnt up inside, my mom already fell and dead, the young lady said my mom was bawling by the window for help nobody helped her. She stayed by the window bawling out “Help help help.” nobody helped her until the fire took the room she was in burned off all the hair off her head and she was holding onto the window and she fell backward and that was it.”

Giovanna Moguel, Love News: Coleman lived alone in the home, but Pitterson says in no way was she abandoned as he and his brothers made routine checks on her and they also had a caregiver who stayed with her during the week. He explains that he was unable to visit her on Saturday evening due to the streets being blocked by the parade, but his brother went to see her and everything was in order.  Police Press Officer, ASP Fitzroy Yearwood, told the media today that a faulty washing machine is the fire’s source ASP.Fitzroy Yearwood, Public Relations, Belize Police Department: “We know that the fire department sent us a preliminary result from an investigation and they’re saying that this fire may have started from a washing machine, a faulty washing machine that was in this house. So that is what we have so far.”

Giovanna Moguel, Love News: However, Pitterson refutes this claim as he states that he has been pressing the landlord to check the faulty power outlets for over a month.

Raymond Pitterson, Son of Victim: “The landlord that owns the house he is supposed to come check the wireworks because from I came here from my mother came I was trying to check all the outlets and only one hole in the outlets them were working. So I called my brother and I told my brother please talk to the land lord and tell him that the wire work needs to be fixed in the house because it’s not working properly. So he said “I will text him.” but I never did get response only that he was saying all the while and that tripped me off that I never remembered about that to ask him again. And then when this thing happened now I just conscious now this man never did come and check out the wire and reset over the wire to make all the outlets them work. Now they say it’s the washing machine that plug in , that washing machine was working good.”

Giovanna Moguel, Love News: Coleman had worked many years as a caregiver and continued that nurturing spirit throughout her entire life.

Raymond Pitterson, Son of Victim: “My mom helped anybody. She was loving, she helped anybody. If you need something she would give you doesn’t matter if she only has a little bit she would give it out and I’d tell her mommy don’t do that you need, you’re old, you’re 83, you’re not working you can’t be giving away your money like that.”

Giovanna Moguel, Love News: Coleman will be laid to rest after the Christmas holidays, but Pitterson and the rest of his family still want answers.

Raymond Pitterson, Son of Victim: “I will never believe this is the way I would lose my mother. This thing hurt very bad. It hurt me that when I went home back I didn’t sleep the whole rest of the night. I got up and I came and I went inside and I said let me see how the inside of this house is because I didn’t like what happened and when I looked in the whole inside of the house burnt up, everything burned and that was sad. I’m telling you and I blame the fire department and I blame the police, two of them I blame. Two of them have the fault so I think something has to be done that is what I think.”