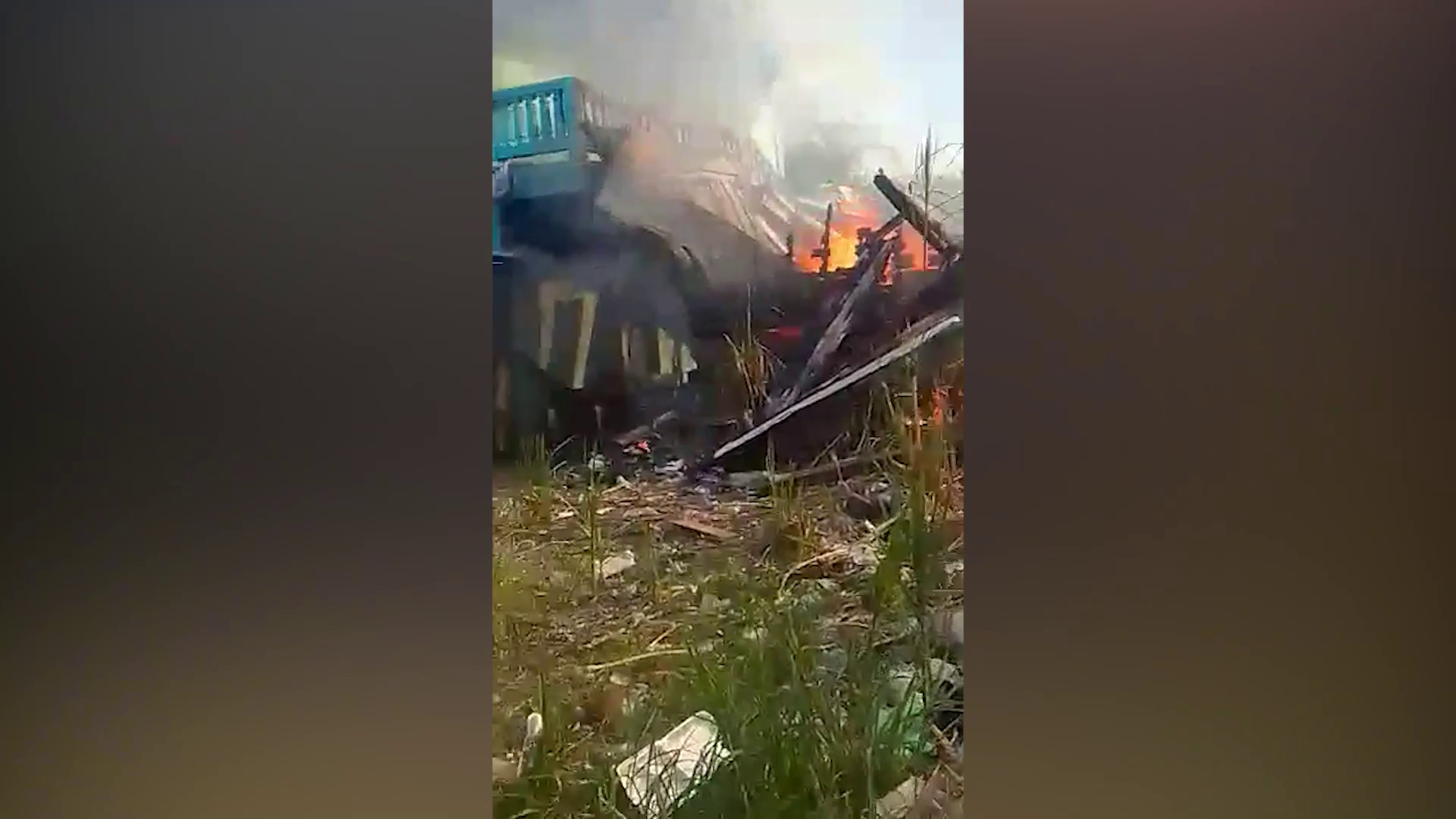 Eighteen residents of Seine Bight Village remain displaced after a fire, which they believe was the result of arson, gutted their homes yesterday morning. At around 8:30, a blaze broke at a home on an unnamed street near the beach in the village. The fire gutted the wooden structure and before firefighters were able to extinguish the blaze; it fanned out to a nearby home. The structures were both completely destroyed, however, fortunately, there were no injuries recorded. Stann Creek correspondent Harry Arzu spoke to one of the fire victims, Lavern Arzu, about the devastating loss of their home and belongings.

Lavern Arzu, Fire Victim: “I was in the house. I just came out and turned my back when somebody came and hollered “Your house is burning.” I said “My house is burning ?” and I ran to the other house. But I just came out from here so I said that I know I left in here okay so I ran to go check the other house to see if it was burning. But when I saw this one wasn’t burning so I ran back and they told me it’s the one in the back and I just came out. I said man it’s really terrible. I got so confused.

Harry Arzu, Stann Creek Correspondent: Did you have any electricity in there ?

Lavern Arzu, Fire Victim: “No electricity was there, no stove was there because we don’t even cook in there all that is there is everybody lives in there but we go to cook in the other side. I know the house alone that is over thirty thousand and the content of it inside I know like it’s a good twenty thousand in it. My sof and etc all my household items was in there. I lost everything. All my things in my house.”

Lavern Arzu, Fire Victim: “Well it’s a good luck that this girl just actually turned back and picked up her baby that was sleeping because I thought the baby was in the house because I left the baby there but I didn’t see when she turned back for the baby and the baby was sleeping so my and the police man ran inside stomped in the door and then the fire just knocked us across the thing, I fell down and hit my back and the back of my foot and my slippers ended up in the fire because I was trying to do my best. That fire was so crazy it looked like I don’t know if it was gas, the way how it blazed it blaze all in the house it was not on one corner it blazed it was the whole house together so I don’t know if it’s gas they threw there or whatsoever they threw but it blazed all together. That was so funny for me the way the house burned because it’s not from through a corner the house all around burned at the same time.”

As we mentioned, Arzu believes it was arson. She says she has been unable to come up with a reason why anyone would want to hurt them.

Lavern Arzu, Fire Victim: “I don’t know what happened. I don’t know they just came and burned down the house for whatever reason. We’ve been through so many threats in this area for no reason you know ? And they could have taken life. They could have taken life. This baby in my hands was sleeping. It’s a lucky thing I don’t know what saved this baby in my life so whoever wants to do us things for no reason God knows it because it’s not an electrical, it’s not anything that could burn down the house, nothing in there that could cause fire but those who come and do it you know yourselves. I leave everything in the hands of God because I know my hands are clean and I don’t stain my hands on anybody. But I’m pleading to the public to help us because we have like almost seven children in this disaster, seven young children under five, people who are going to high school, we lost everything. They couldn’t save anything. My house burned down, my sister’s house burned down, and all the houses in the yard had fire damage on it we had to patch up something so we could find a place to rest. My house was a two bedroom wooden house treated pine and my sister’s house was a two bedroom also full and stocked up. We just bought new things for this Christmas and we’ve just been through so many things.”

The official cause of the blaze is yet to be determined by the fire department. If you are willing and able to assist the fire victims they can be reached at 653-4978.