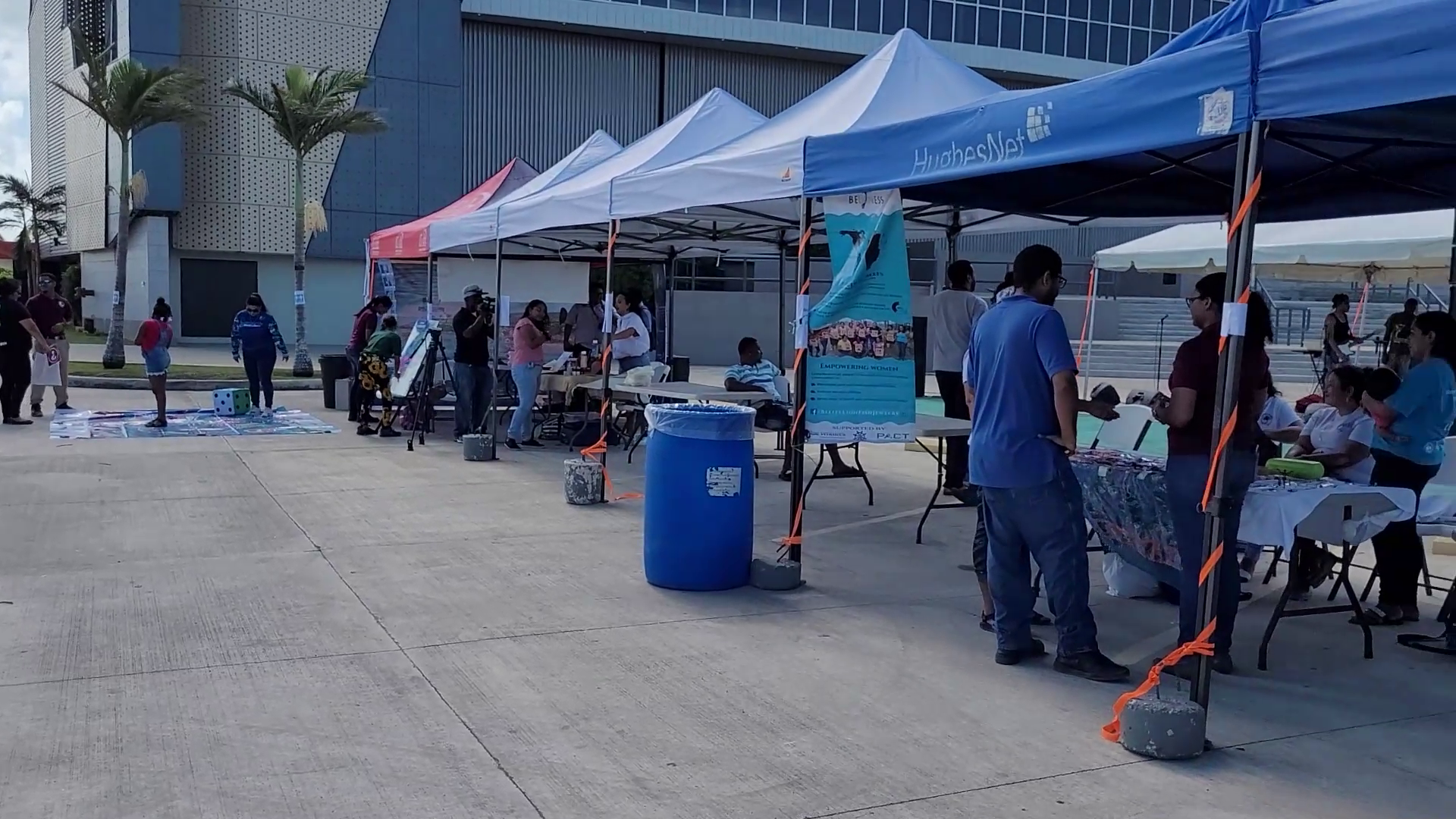 Today, the Ministry of Blue Economy held a Blue Economy Fair in Belize City to inform the public about the importance of the country’s marine resources. The event was a part of the ministry’s Climate Resilience Forum which included panel discussions about the newly launched Marine Spatial Plan, the role of vulnerable groups in the Blue Economy sphere, and women participating in the blue economy sector. Reporter Vejea Alvarez attended the fair and tells us more.

Vejea Alvarez, Love News:  Today, the compound of the Belize City Civic Center was taken over by persons passionate about protecting, preserving, and conserving the resources within Belize’s Blue Economy. The event was organized by the Ministry of Blue Economy with the goal of informing the public about the importance of our marine environments and their resources. The fair featured several educational booths from various stakeholders including the Reef Keepers Belize, an NGO which operates in the south. The organization’s Executive director, Lisa Mulcahy, shared the importance taking part in the event. Lisa Mulcahy, Reef Keepers Executive Director: “I think that the public doesn’t have a good understanding of what the Blue Economy is or how they can benefit from the marine environment by taking care and conserving the marine environment so that was one reason we thought it was really important to be here. The other reason is that we educate kids about the marine environment and we were hoping some students from UB or other high schools would come that we could talk to them because we have some lovely information here about careers in the marine industry.”

Vejea Alvarez, Love News: And, those jobs also include being an entrepreneur, says Dianny Henriquez, one of the members of the Belize Lionfish Jewelry Group, an all-women organization dedicated to fighting the invasive Lionfish species. She explained how their work aids in protecting Belize’s barrier reef. Dianny Henriquez, Entrepreneur: “We start off by explaining to the people that we can actually hunt the fish, eat the fish an the wear the fish so we utilize the fish in every way possible so the fish doesn’t go to waste. So from one bad thing we make a lot of solutions from the guides going to hunt the fish, from the restaurants who provide and let people eat the fish and from us the jewelers who create a piece of jewelry. So we fall under the category as we help the environment as well because we need a healthy reef. We play a huge role under the Blue Economy because we are very interested and we want the reef to stay healthy and with the recent research that we have had and found out that looking at the other places like the Mediterranean and Australia that the impact that the lionfish is doing bringing down the population of all the fish so if we lose our healthy reef and the fishes there it’s a huge impact for our environment, our livelihoods.”

Vejea Alvarez, Love News:  A part from invasive species, Belize’s marine life is also under threat from climate change, according to Jamal Bohn, the National Coordinator of the MarAlliance. The group studies large fishes such as sharks, rays, turtles and other commercial fin-fish. Bohn explained how the group has observed the impact of climate change on the high seas. Jamal Bohn, National Coordinator, MarAlliance: “The most obvious one I would say is the natural disaster we just dealt with. So the stronger more intense storms and so on do cause a lot of challenges for these ecosystems, it causes direct breakage so you have impact on coral reefs, changes in currents and so on, a lot of turbidity so churching up of waters so it does impact the use of these areas by these animals. It does also influence currents as I mentioned, the availability of food for a lot of these animals that we study especially the predatory ones and so it does have a lot of implications for their populations long term and also where they’re found. So if there is unavailability of food in one area they’ll move to another and sometimes that means moving outside the country beyond Belize to other parts where there’s not as many protections.” Jolie Pollard, Owner of Ikooma: “The seaweed grows on the ropes and when they harvest it and they dry it and I buy it from them I know that seaweed will be there again because it’s regenerative. Once it breaks from the rope it starts growing again and I can get more seaweed and these guys are able to supply not just me but people all over the country and people outside Belize now with this amazing resource that is not just regenerative that makes it special but this actually provides a very important marine habitat for juvenile wildlife and so I mean it helps to create a healthy ecosystem in the sea so that’s all a part of the brand. So there’s that and then of course also a product that really helps people with their hair.”