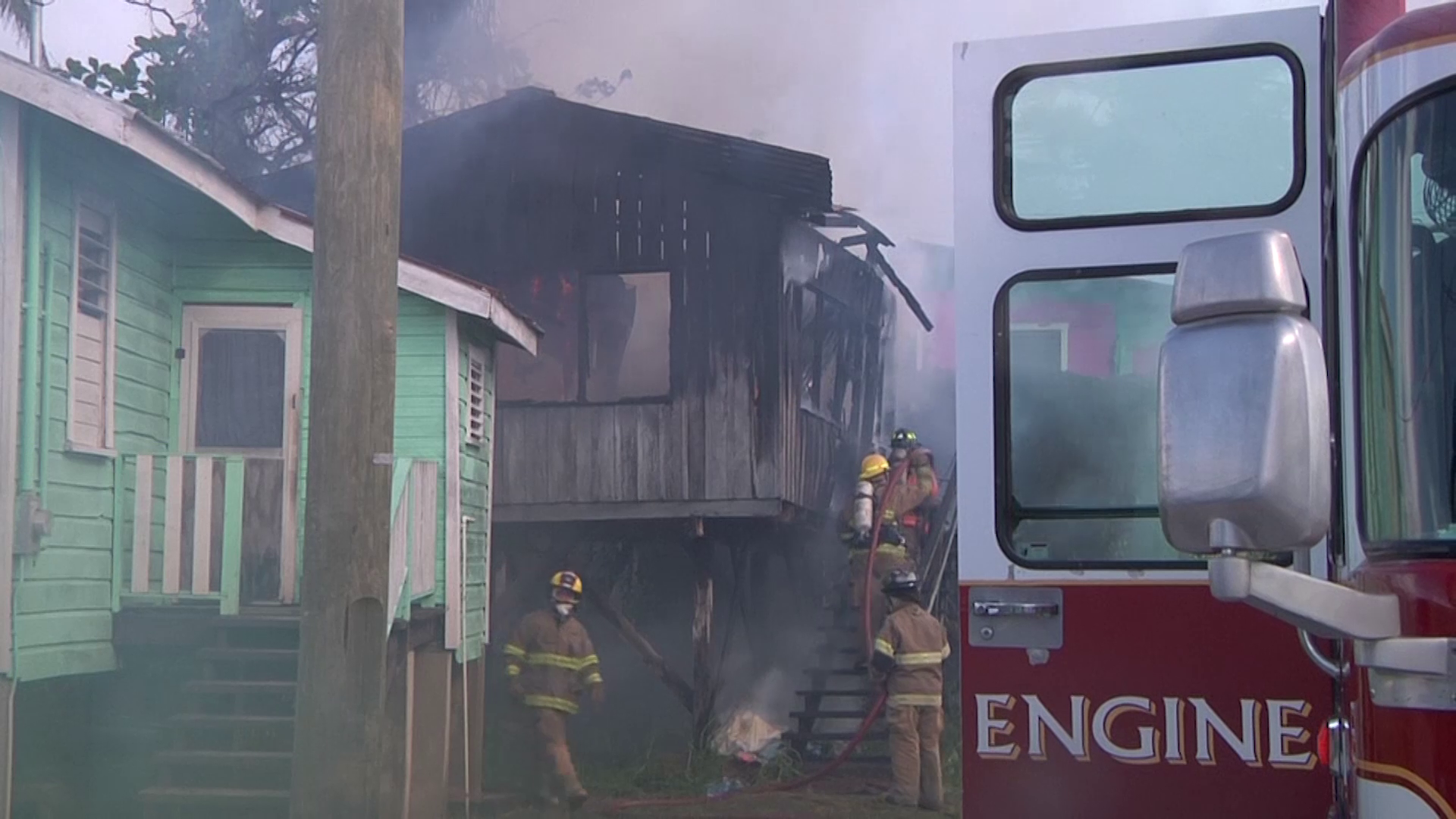 Murphy Family Affected by House Fire On Their Property; One Structure Completely Destroyed

A fire this afternoon destroyed a Belize City house. The inferno broke out at the Murphy residence on St Joseph Street. Fortunately, there are no injuries to report tonight. Love News was first on the scene and Giovanna Moguel has the details.

Giovanna Moguel for Love News: This Christmas Season is not looking so merry for the Murphy family and that’s because at around two o’clock this afternoon, Brenty Murphy’s house on Saint Joseph Street in Belize City caught on fire. Murphy had just left his house minutes before the blaze broke out and was socializing with a friend down the street when one of his neighbours alerted him that his house was on fire. Brenty’s sister, Darlene, resides a few feet away from him on the same property.  Darlene says she had not too long ago gotten to work when she received the call. Darlene Murphy, Sister of Home Owner: “ I just ran and I ran to get my son and by the time I got to the lane by Nurse C Street I saw the house already on fire I couldn’t do anything. It was already on fire already.

Giovanna Moguel for Love News: The first thing that came to your mind was ?

Darlene Murphy, Sister of Home Owner: “My house ! Of course. See where we are ? Close.”

Giovanna Moguel for Love News: Brenty says did not leave anything burning inside the house. But, Darlene would beg to differ. She explains that this isn’t the first time a fire has started on their property. She adds that in the past, she has had to go over to Brenty’s house to put out fires he ignited due to smoking.

Darlene Murphy, Sister of Home Owner: ” He left something on. How will the house burn and only he lives there, nothing is in there, nothing is in there just him and the house so how will it burn. He has a history of liking to light fire and this is not the first, this is about the fifth. But when you talk to him he doesn’t listen and he likes to cuss you so I just leave him alone but now he went to far. He likes to leave things lit up there and he goes about his business but I didn’t know something was lit up there because I usually go up there but this time I didn’t go up.”

Giovanna Moguel for Love News: Due to the close proximity of the two buildings, Darlene’s house sustained significant burn damage to the back portion. But, Brenty’s house was left completely destroyed. Darlene says that she knew this would eventually be the outcome.

Darlene Murphy, Sister of Home Owner: “With him, it sounds cold right but he will have to find somewhere because this is not the first, second, third, fourth, this is the fifth and they put something back there and we’ll have the same problem because he’s mentally ill. And when you talk to him and say anything he says it’s not him it’s his brain so what am I to do ? I want my house. I need my house. Where am I going to go ?”

Giovanna Moguel for Love News:  Even if she wanted to help, she financially can’t because some of her appliances were destroyed by the water that seeped into her house while the firefighters were trying to put out the blaze.

Darlene Murphy, Sister of Home Owner: ” I can’t help him personally. I can’t. Now for my one now I will probably have to do it myself, try to buy the boards that are damaged and get a stove because where they were putting the water is right where the stove is so I’ll try to get that. I won’t beg I don’t like to beg and I don’t like anybody to give me anything so I will try to get that back before Chrismtas.”

Teenager Dies After Being Involved in a Vehicular…