And during our interview with the Prime Minister, we also asked him about Caribbean International Brewery Company Limited- the producers of Mine Beers. The company is currently before the courts trying to have its three point one million dollars returned by the Financial Intelligence Union (FIU).  The monies were confiscated during a raid at the company’s headquarters in Carmelita Village, Orange Walk. The company then fire off a press release, accusing the government of being vindictive. Today, the media asked PM John Briceno about it. 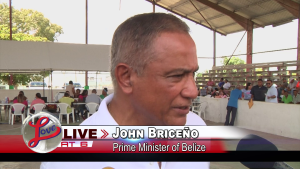 John Briceno, Prime Minister of Belize: “With Caribbean Investment the brewery I had absolutely no idea what was going down. As you know they don’t need to check with me and so that’s under investigation right now and the issue of the undisclosed money and the issues with immigration but we do support them. They are creating jobs for Belizeans so there is full support for them from that angle but then everybody has to follow the law it doesn’t matter who they are.”