PSU Calls On Members to be Ready for Action

But the Public Service Union is not accepting the Prime Minister’s explanation. Today in an interview with the reporters, President Dean Flowers is asking that public officers’ increment be unfrozen. That request will be taken to the union’s Council of Management for further action. 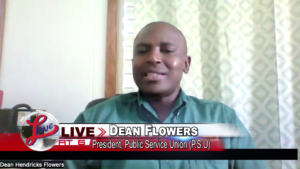 Dean Flowers, President, Public Service Union: “For them to try to justify giving them an additional $750 a month to a total tune of $1500 in entertainment allowances alone is insulting and unacceptable. We have public officers who are earning less than $18,000 per annum when these people are walking home with that in a single allowance because we are not talking about their motor vehicle allowance and their telephone allowance which as we all know hovers in the thousands as well. It is unacceptable and if it is that CEO’s can get back what was never taken from them then the Public Service Union of Belize on behalf of public officers must demand the immediate unfreezing of our increments because that was our sacrifice. That was our sacrifice. And if everybody can get back what they sacrificed including each HODs which are our comrades but they also got back as I understand their entire housing and entertainment allowances then we are saying we need ours. We are the mass, we are the masses here in the public sector and it is an acceptable that we continue to be used as a sacrificial lamb so that a few people appointed by this administration can continue to live high and continue to eat and benefit at the expense of poor public officers and the poor people because in effect that is what that is the margins to which we are being pushed to the level of poverty and so the Public Service Union by way of its council of management will be putting together a plan of action and will be going to its membership for a mandate for us to ensure that the Government of Belize responds to our call, that increments be unfrozen if not immediately then effective on April the 1st for the next fiscal year. And so let this be a warning and a call to public officers that we will be coming to you for a mandate to get back what is rightfully yours because to date only we continue to sacrifice. It was on our backs that they were able to create fiscal space to be able to return to the house on numerous occasions for supplementals  for an unbalanced budget.”

The UDP fire off a press release this afternoon, calling on the government to rescind the allowance restoration and make the funds available to reinstate the public officers increment.