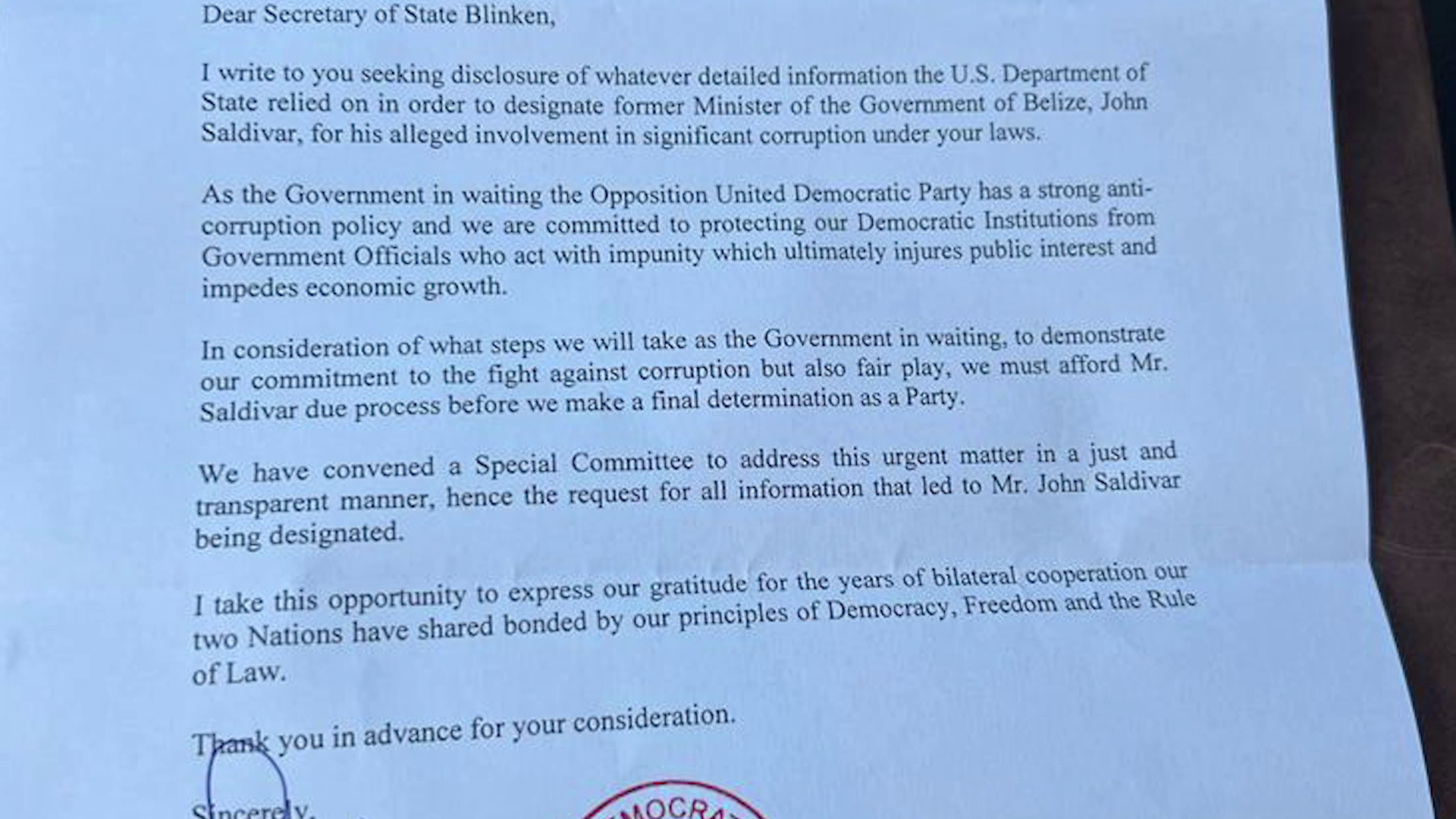 UDP Chairman, Senator Michael Peyrefitte has written to U.S. Secretary of State Antony Blinken, asking for disclosure of whatever detailed information the department has for its rationale to designate John Saldivar, former Minister of National Security. As listeners remember, on November 15, Saldivar’s designation came after the U.S. says he was involved in significant corruption. His party, the UDP, has appointed a 7-member committee to determine his future. Peyrefitte’s letter says in part quote, “In consideration of what steps we will take as the Government in waiting, to demonstrate our commitment to the fight against corruption but also fair play, we must afford Mr. Saldivar due process before we make a final determination as a Party” Unquote. We asked Peyrefitte about the letter to Secretary Blinken. Michael Peyrefitte, UDP Chairman:  “We have a member of our party who is looking to enter into a convention to represent our party and a designation is given like the one that was given not only against him but his wife, his children a minor child ,everybody except the dog. And so we want to see what evidence they are depending on or what evidence they used to come to that decision so that the UDP may look at that evidence and come to our own decision. So we just wanted to know what they have because they didn’t present any information, they didn’t say that he was indicted or charged or any of that sort. So we want to see what evidence they have so that we as an organization can assess that evidence and think of a way forward.”

The media also asked Peyrefitte whether the party believes it will actually receive the information, given how the U.S. often handles these situations.

Michael Peyrefitte, UDP Chairman: “Time will tell but whether they want to give it or not we have an obligation to ask for it because you’re making a very serious designation and purportedly you have information that a particular person acted in a way when they were Minister of Immigration for approximately three months so we want to see what you have. We want to see what they have that not even the Belize police seem to have. You have a PUP government that’s been in power for two years they haven’t revealed anything that they’ve seen that was illegal in the department during that time so if our police doesn’t have information that they seem that they can charge with nor the DPP. If the current government doesn’t seem to reveal information that they have I mean they held a Commission of Inquiry over a vehicle and two chairs so you would think that when they went through the immigration department that they would have found something that they wanted to find some inquiry on or some sort of information that they would want to bring criminal charges on like they did with Minister Montero. So Belize police not bringing charges, the DPP not looking to institute any charges, the PUP government not revealing anything illegal and the US saying that they’re designating him based on certain actions in immigration department we want to see that.”

Love News also asked Peyrefitte about whether asking the U.S. for information is even worth the time. Here’s what he had to say about that.

Michael Peyrefitte, UDP Chairman:“It doesn’t make me not obligated to ask the question. That’s their country you know ? They can designate who they want to designate but we have our sense of self worth too. We have our dignity too. I know there are some people who shake and quivery and jump when the white man says jump but we’re not an organization that does that. I mean you make a claim against us we have an obligation to say well what are you using to back up your claim I think that’s a legitimate question and I think that anybody who would be offended by that just wants to be offended but how in the world can you do that and then be offended or somebody would criticize you for saying you have said I have done A,B,C, you have punished me in this way D,E,F I mean it’s not out of the way to just simply ask well what did I do ? Show me what I supposedly did. I think that’s basic respect for yourself that you would ask that question.”

Patrick Faber’s future in the UDP depends on…

CCJ Says All Eyes are on Belize’s Maya…