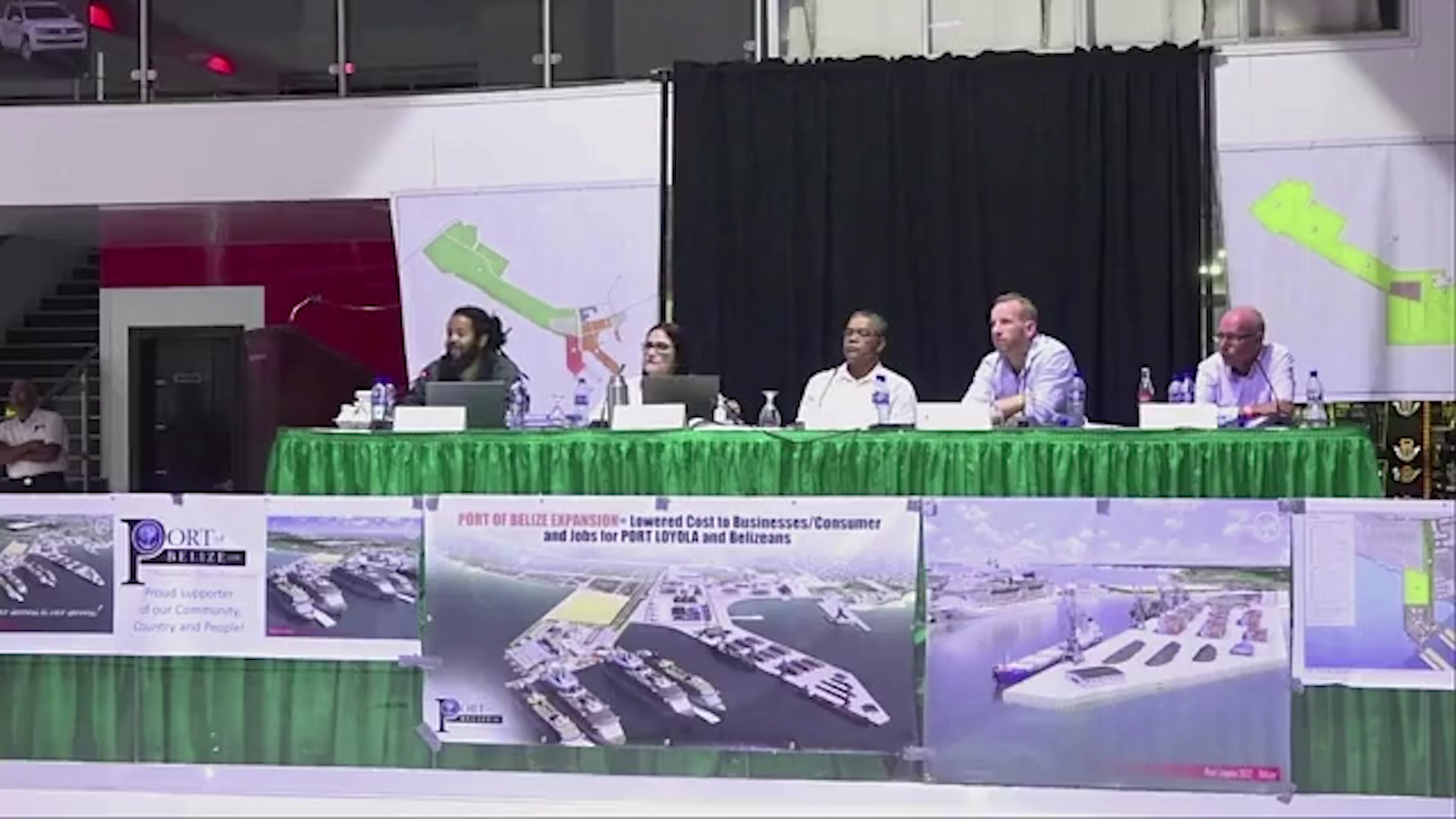 Waterloo Back for Second Round of Port Expansion Project Consultations

Friday night saw the second public consultation that was held by Waterloo Investment Holdings Limited on the proposed Port of Belize Cruise Tourism and Port Expansion Project. With this consultation, the company is hoping to successfully comply with the requirements needed to resubmit its Environmental Impact Assessment (EIA) to the National Environmental Appraisal Committee (NEAC).  The company’s initial submission was rejected due to not undergoing adequate consultations with persons living in the area. Unlike the first session that was held at the beginning of September which lasted six hours, this one lasted just a little over three hours. Giovanna Moguel has the story.

Giovanna Moguel, Love News: The second round of public consultations was held by Waterloo Investment Holdings on Friday night. The discussion was geared at eliminating any doubts or misinformation about the cruise tourism facility and cargo expansion for the Port of Belize Limited in Port Loyola. The panelists listened to the concerns about the proposed project’s effects on the environment, and one of those core topics was the dredging component.  The proposed project involves the need for dredging to widen the area of the port facility. Local Investment Consultant, Allan Herrera, explains that they have proposed necessary measures to ensure that this takes place in an environmentally friendly manner. Allan Herrera, Local Investment Consultant: “Over time of course the people who undertake these projects, the engineers and the developers have perfected the art of dredging and so over time the environmental impacts of these dredging activities have decreased considerably. I’ve worked on many environmental and social impact assessments where dredging is a big component and we have received approval for these dredging activities because we put in the proper mitigation measures and we’ve been able to convince the stakeholders that this dredging can take place in an environmentally responsible manner.”

Giovanna Moguel, Love News: The dredged material will be disposed of in an area west of the property, where previous dredged materials were placed about twenty years ago and since then, flora and fauna have significantly diminished. However, Herrera explains that using the existing port facility’s location, which is a brownfield site, will significantly reduce environmental impacts.

Allan Herrera, Local Environmental Consultant: “The area where this development is taking place is a brownfield site and I did draw the attention of our listeners to what a brownfield site is. It’s an area that was previously disturbed. It was used for previous development. Could be any kind of development. In some countries its mining, it’s hazardous. In this case it’s not hazardous but it was used before in 2002/2005 during the dredging operation. At that time the entire area was used for the placement of dredge spoils. There was almost nothing left green there. We never showed it in this presentation but previous presentation we have shown it. Nothing stays the same. Nature is very dynamic. Over time something will grow. What we’re seeing there is regeneration. It’s mixed regeneration. There is some mangroves but it was previously disturbed it’s not climax mangrove forest this is a disturbed forest ecosystem. It’s trying to get its foot back but it’s a very weak footing but what we’re saying is it – the main thing and this is key, this is a previously disturbed brown site area.”

Giovanna Moguel, Love News: While Herrera argues that the proposed manner of disposing of the dredged materials will have no significant detrimental impacts on the land area, Project Manager of Stakebank Enterprise Limited, Troy Gabb, raised the concern of contaminated matter that could possibly be brought onto the land during that process. Troy Gabb, Project Manager, Stakebank Enterprise Limited: “Anybody knows that what you’re going to be doing is dredging up settled material. Material that is contaminated with feces, e coli et al. That is a fact. You can’t argue that because that is exactly what comes out of the sewer ponds that flow into the river in that area. Two, if it is that those sediments that you’re talking about that is not alien is going to come on shore at any point in time and God forbid we just came out of a storm, if those materials were in front of those Port Loyolan residents who were up in mud up to their ankles imagine where they would be if that between 7.5 to 10 million cubic meters was in front of them being washed up in the shore because your own study says that these settlements take about ten years before they’re settled. So in front of them at the point in time when this storm is occurring what would have happened to those persons?”

Giovanna Moguel, Love News: According to Herrera, the company has employed scientific methods to test the material that will be dredged.

Allan Herrera, Local Environmental Consultant: “We did an analysis of that. In fact it is within the environmental impact assessment and these numbers are not what we feel like shooting off the top of our heads these were done in scientific studies and the samples were analyzed in the laboratory and it shows that the materials within the area where we’ll be dredging it shows that that material is not contaminated. Now there will be some people who will argue against that I’m not saying now. I’m saying I’m a man of science and I don’t listen to just the opinions of people talking just off their head. I listen to science and I respect the scientific method and the methods that we have and the samples that we collected were sent to international laboratories. These are independent international laboratories and those are the results they gave and the results they gave is saying that the material is not contaminated.”

Giovanna Moguel, Love News: Apart from the environmental and health safety concerns, residents of Port Loyola want to know the economic and employment value this project offers to them. As it is considered one of the more vulnerable communities in the city with many living on the margins, the project is boasted to be able to provide over two thousand job opportunities. This resident, Henry Cunningham, says despite the harsh criticisms, this is the only large-scale investment he has witnessed in that area. Henry Cunningham, Port Loyola Resident: “A lot of you all I hear are against it, the port right ? But honestly I mean like what the guys are saying you don’t think the port bring revenues to the people ? None of you live behind Port. None of you know what those Port people go through you understand ? Things like this create jobs for people basically and creating jobs for people is a benefit the people and their kids. I bet none of your kids go  to school where those people’s children go to school. You’re talking about the hurricane will bring this and hurricane will bring that a lot of those people don’t have houses right now. I’m sure all of your houses are good. Why those people can’t live the way you live ? Let the make their money.”

Giovanna Moguel, Love News: But, some residents, like Shanique Lewis, feel like the Cruise Ship component is being placed at the forefront of job opportunities, and, being an IT major, she wants to know where she would fit into this. Social Impact Consultant, Dionne Chamberlain, says that the port will be highly digitized which opens the door to employment for many people. Shanique Lewis, Port Loyola Resident: “I would never be a tour guide. I don’t really know how to braid hair. I don’t know how to carve, I don’t know how to do any of that so for me cruise is not my thing. But I’m an IT technician currently going to school to get my Associates Degree in IT. If we’re about to build a new cruise port you know definitely technology will be introduced to Belize, things that we have never seen before. If this new port is not introduced I can currently say right now I have no place for employment for my new skills that I’m working hard and paying for.”

Dionne Chamberlain, Social Impact Consultant: “And especially your position in terms of you learning IT an efficient port requires more technology and digitization for it to work properly because it’s going to be definitely focused in that area and yes that is where the jobs will be directed heavily and so we do see employment for persons like yourself there.”

Giovanna Moguel, Love News: These are only but some of the concerns that were raised Friday night. And, there was no shortage of aggressive claims from members of the public that were quickly shut down by the panel.

William Neal, Master of Ceremonies: “And I think that has been repeated a couple times and all the other questions have to do with the southside impact to people’s – excuse me.”

Panelist: “Officer could you please put out the young lady ?”

Panelist: “Ma’am do you have a question ?”

Youths in Punta Gorda Learn how to mitigate…